I’ve written a ride diary for this trip for the ADV rider forum, being aware that many others may have done rides in Ladahk, but maybe something here will help guys with a little bit of info that will make preparations easier because I had a lot of questions before setting out and a few were still unanswered when I got on the plane.
I spent weeks trawling the net looking at the various tour packages being offered, ranging from the ultra up market expeditions with their own dedicated doctor, and pressure bag ( to counter serious mountain sickness ) to those like the one I chose, being minimalist and just running support vehicles and a mechanic. In one of my madder moments I thought of doing the ride on my own because of being able to opt for the more gradual climb from Srinagar to Leh, rather than the very quick ascent from Manali to Sarchu over the Rotang  pass on day 3. However thankfully, I didn’t and realize that I wouldn’t have had the resilience to keep going alone and would have missed the fun of the group ride.


I intended hiring a bike in Delhi and after initially booking with Tony Motors in Karol Bagh, found Cosy Travel which would do an Enfield Classic 500 for 1000 R per day. 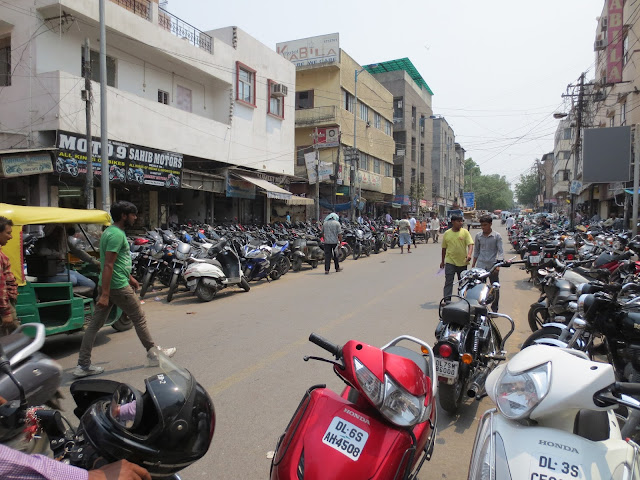 I wanted fuel injection and the gear change on the left and racks fitted. Neel did a deal with me whereby I left AUD $1000 with him as the security deposit and got the same returned to me, avoiding ending up with a heap of rupees on the day before leaving Delhi. I saw this Enfield at K B, which interested me more, a new Indian developed model, with an enlarged 535cc engine and good quality “bought in” ancilliary componentry- fuel injection, brakes etc and dreamed of riding one of these – crazy, because you couldn’t go to Ladahk on one. 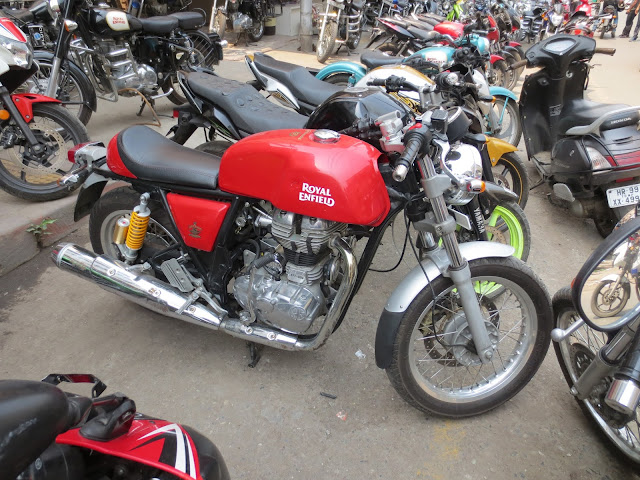 For those who are interested in where these Enfields originated, here’s a bit of info:
Royal Enfield can trace its history right back to 1851, when George Townsend established a needle making mill in Hunt End, Redditch. After his death, his son George started making safety bicycles, but ran into financial trouble, and R W Smith and Albert Eadie were appointed to take control in 1891.
The works were re christened the Eadie manufacturing Co Ltd, and a substantial contract to supply precision rifle parts to the Royal Small Arms factory in Enfield, Middlesex, put the business back on its feet. In celebration , the new bicycle was called the Enfield.
The prefix “Royal”(in tribute to the Royal Small Arms factory) was licensed by the Crown and one of the most great names in motorcycling history was born, soon adopting its famous trade mark “Built like a Gun”.
In 1901 R E’s first “motor bicycle” with an engine mounted above the front wheel appeared, and by 1912, motorcycles with larger V twin engines from Motosacoche, Vickers Wolseley and JAP were being produced.
During the First World war, R E gained contracts from both the U Ks War Department and the Imperial Russian government. When peace was made, more models followed including a 976 cc twin in 1921 and a 350 single, three years later. In 928 R E pioneered the use of saddle type petrol tanks along with centre spring front girders.
Around half a dozen military models were produced during WW2, mostly side and overhead valve singles, including the 150cc ‘flying flea’, looking a bit like a stripped down BSA Bantam, and designed to be dropped by parachute.
After the war ended, Royal Enfield marketed the 350cc overhead valve Model G and 500cc Model J, which had rigid rear ends, but telescopic front forks. In 1949 the 350cc Bullet, with front and rear springing went on sale, and this model, and the 500cc version that followed were the basis for the continuing manufacture of Indian made Royal Enfields.
The first of R Es parallel twins, a 500cc model, soon followed and from it the popular Meteors, 700cc, Super Meteors, Constellations, and finally the 736cc Interceptor were developed.
The 250cc ‘learner class’ dominated the final British chapter, with the Clipper, Crusader, Crusader Sports, Continental and Continental GT. Enfields also produced every day two strokes such as the Ensign and the Prince.
By the mid 1950’s, there was a substantial demand for sturdy trouble free motorcycles for the Indian Police and Army and an order for 800 350cc bullets was placed. From UK components supplied under licence, assembly was handled by Madras Motors, and the Indian bikes are still made at Chennai. The tooling equipment for the Bullets was sold to Enfield India in the 1957 and long after the Redditch built bikes have become history, they are still being turned out in their thousands, the latest versions having fuel injection, twin spark engines.
I wasn’t very enthusiastic about riding an Enfield, even before the trip started but saw that they had two major pluses – the possibility of being easily fixed at the many bike workshops along the way and their ability to take the rough road punishment that might have cracked the alloy frames and wheels of other bikes. So despite the assurances of Enfield owners here telling me that I’d get to really like them, I didn’t. The Classic I rented, performed poorly and I’m unconvinced that others would be much better. But, more of that later.
With IAA, the main questions were about AMS and the cold and Akarsh was fairly nonchalant about both, so I got some Diamox before leaving and took a heap of padded gear.
Taking an armoured jacket, boots, helmet and the “warm” gear meant that this wasn’t much less than I needed to take for my US ride a couple of years before. I have a gear list if anyone needs one.
I had to pick up the bike from Todapur, not a long way from where the hotel was at Parharganj  but was freaking out when, after arriving in Delhi, I first got in a tuk tuk and saw what happens when there aren’t any road rules. It was seriously scary and I thought we would end up under a bus but these guys know exactly where the four corners of their vehicles are and operate with millimeter clearances.   Delhi is a huge confusing city and a GPS on the bars would be great. You really don’t know what the surrounding vehicles will do and the most daring win at the roundabouts. Apparently you get your licence by post.(and it shows)
I made the mistake of not spending enough time checking the bike over because I had a tuk tuk waiting to guide me back and problems arose later.
I deliberately chose a group which was bar one Malaysian, all Indian Nationals and thinking that as the only pakeha, I would get a more direct “cultural experience”.  I thought that if the group was largely Europeans, then on passing though the small himalayan towns, we’d be ‘isolated“ from the locals.  My own experience bore this out because once outside Delhi, speaking English was not widespread and I relied on the guys in the group to find what I wanted.
So travelling with these guys who largely were bi lingual, was great and I learnt a lot. The downside was the menu.
They could eat stuff at the roadside dhabbas and not have a problem. Many ex patriate Indians I’ve spoken to here in Aus have told me that when they go back visiting, there’s no way they can just eat anything and not get a dose of delhi belly. 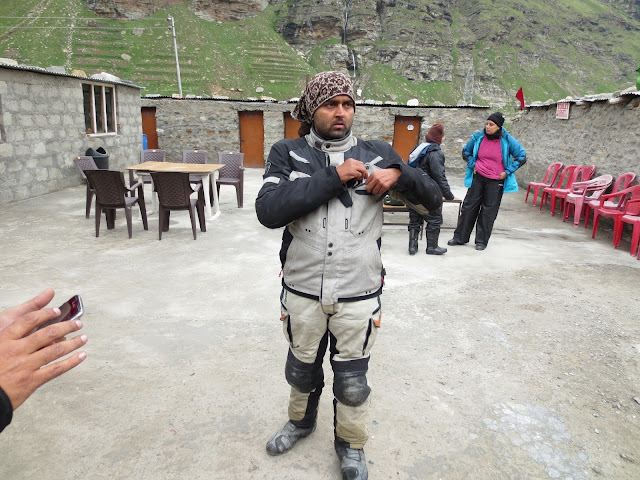 I had a few e mail exchanges with Akarsh Pall from I Am Adventure and felt reassured by his answers although there was a tricky moment when I asked him to demonstrate that they weren’t a bunch of crooks. It was all go for a 28 May start until I broke my shoulder in March, and suddenly the plan collapsed. I kept aiming for a 28 June departure and was lucky that despite a bad lateral break, it healed well. The ortho surgeons were a bit skeptical of my being ready for what they considered a big ask for a recent break.